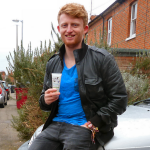 Appalled at the dishonesty of the so-called ‘natural’ cosmetics industry and the 500% increase in childhood skin problems (eczema, allergies, acne, etc), Sam Wallen Russell used his gap year to work with the University of Surrey to develop the world’s first ever 100% truly natural face wash – something the $120 billion skin care industry had deemed “impossible”.

Motivated by the scandal of the developed world’s skin health crisis (of which one major factor is hidden chemicals in existing products), Sam and his twin brother used this industry redefining technology to co-found Award Winning British success story JooMo Ltd.

They are now pitching to Sir Richard Branson, and you can help Sam by voting for JooMo® at: TinyUrl.com/VoteJooMo

“One day every teenager in the world will use JooMo” was a remark made by two independent distributors: initially targeting young people’s skin problems, JooMo®  are perfectly positioned to swiftly become a major global business and brand in the $30 billion natural personal care market. A unique Cooperative business structure with values of honesty and fairness for all underpins JooMo’s passion to build a strong wealth creating business.

Explaining the personal story behind the concept of JooMo®, Sam (who is also a University of Surrey first team tennis player) said:

“I suffered from cold sores and allergies throughout my childhood, and normal prescribed products just made the problem worse!” “Ever since I started using JooMo 4 years ago I have not had one single recurrence of cold sores, I’m allergy free, and I feel amazing on and off the court!”

For more information please Contact Us or Email: info@JooMo.coop

Their products repair the damage caused by normal skin care products, and the company is challenging the natural skin care industry to bring in a new era of honest labelling.